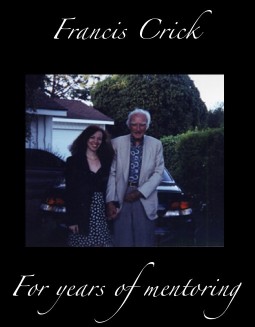 Francis Crick has been perhaps the most influential of recent scientists. He, James Watson and Maurice Wilkins were jointly awarded the 1962 Nobel Prize for Physiology or Medicine for discovering the molecular structure of nucleic acids and its significance for information transfer in living material. This work changed much of 20th century science.

I met Francis while working at the Salk Institute in La Jolla in the summer of 1996. During a tea time meeting, he engaged me in a conversation about information processing in the brain. No one mentioned his name and he introduced himself Francis, but we became enthralled in the conversation and met later that day to continue it.

It took a few more days to realize who Francis was. By that time I had already had dinner with him, visiting his beautiful home and wife, having discussions about memory, sensory processing and consciousness. Francis was curious about my thoughts about computation in nature and the meaning of computation in each of these systems. When I learned who he was, we were already friends.

Francis and I corresponded in email, hand-written letters, and in person. During my visits, we often watched recorded talks that he gave, which he would pause in order to expand on his ideas. He wanted me to use my knowledge in computation in order to help solve long standing problems in brain research. My research interest has clearly changed since meeting and being mentored by him.

In my professional and personal life Francis made himself available not only to give advice but to support me privately and professionally, particularly supporting me in gender related issues.

In the spring of 2004, Francis wrote to me from La Jolla telling me how fragile his health was and asking me to come and see him soon. A true gentleman, even though in pain and fragile, he insisted on taking a cab ride to pick me up at the hotel, since a lady should not be asked to take a cab ride by herself. In our last meeting Francis talked just a little about his health. Instead, he wanted to know the details of scientific problems I was working on, and in a very intense and fast talk, gave me a long list of neuroscience problems he believed I have the ability to solve.

I am only at the very beginning of this list, but Francis will always be alive in my heart and my consciousness and my work.